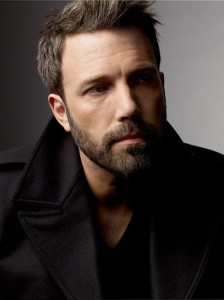 This is a Batman announcement I never saw coming: Ben Affleck is Batman.  If they announced that he was writing the movie, or that he was directing it, I would have been pretty excited, but him being the new Dark Knight is pretty hard to swallow.

I think he will be a fine Bruce Wayne, I mean look at the picture above he is dark and handsome, but he smirks all the time.  I don’t want a smirky Batman.  If I wanted a smirky Batman I would have been asking for Jonathan Frakes (Will Riker) to be Batman.  As a matter of fact I would love to have Affleck and Frakes have a smirk-off it would be a thing of beauty, but even in Batman’s lighter adventures he didn’t smirk.

To be fair, which I don’t want to be right now, his latest roles have been much better, and he deserved his Oscar for Argo, but he is still the guy that made Gigli and Pearl Harbor, ugg.  I guess we will have to wait and see how this turns out, but my immediate reaction is negative, but I hope my gut is wrong and we get a fine movie in 2015.

My buddy Daniel has a more positive outlook.

7 Replies to “Ben Affleck Is Batman?”