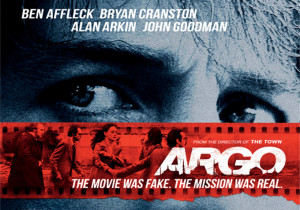 Argo is a Ben Affleck directed film from 2012 based on the Iran hostage crises in the late 70’s and early 80’s, but not about the hostages at the embassy, but the six that escaped.  The film won best picture in 2012, but did it deserve it?  Probably.

The film starts off explaining the political situation in Iran (crappy), and then moves to the Iranian militants invading the US embassy.  During the turmoil six people escape and hold up at the Canadian ambassador’s house.  Soon US officials learn of the escaped six and start to come up with plans to get them out of the country, but the best bad plan they can come up with is to create a fake movie, and scout Iran as possible location and use the six embassy workers as the scouting crew.

The way Affleck blends the movie with old stock footage makes this movie seem like real life, and since it is based of true events it kind of is.  There have been outcries from Canada, and the escapees themselves because the movie minimizes Canada’s role in the rescue, and the last pulse pounding scenes of the movie are exaggerated to say the least.

The acting in this movie is excellent, with the best parts going to John Goodman and Alan Alkin as the Hollywood producers as of this fake film.  I am sure that since they have been in the industry so long it was fun for them to play old industry insiders playing Hollywood for suckers by planning a film that was never going to happen, and they add a sense of fun to an otherwise tense picture.

This movie was exciting to watch, and I think everyone involved did a great job.  I would love to see an actual documentary of what really happened with these six people stuck in a hostile land.