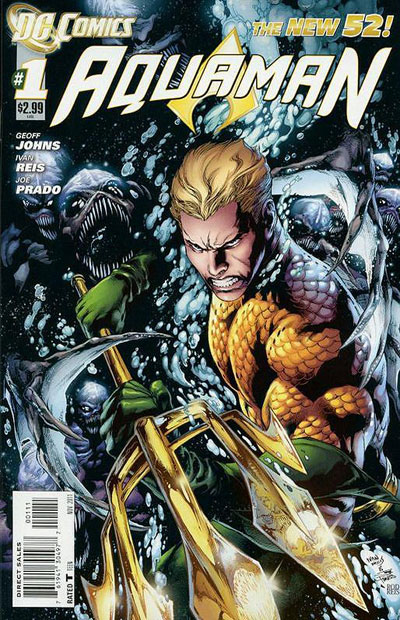 For one reason or another Aquaman has always been thought of as a joke.  I guess it has something to do with his water based powers, or maybe it was his terrible representation in the old Super Friends cartoon, but whatever the case besides being able to control fish, he is super strong, can jump long distances, and has a weapon that can pretty much destroy anything.  Despite all this people still look down on him, and that is what Geoff Johns and crew address in Aquaman’s New 52 re-launch.  Even as a fan of Green Lantern, I have to say Aquaman may be Johns’ best work.

In this book Aquaman (Arthur Curry) has given up ruling the sea kingdom of Atlantis, and he and Mera (don’t call her Aquawoman) decide to instead protect the coastline from harm.  The humans in the area misunderstand him, and they think of him as a looser in the superhero community even though he is regularly saving their lives.  He is constantly the butt of their jokes.  While this gets on Mera’s nerves, Aquaman does his best to let it go and still do what is right.

I love that Aquaman continues to be a hero even though people don’t really like him that much.  It is easy to rescue people when they love you, but to save them even though they mock you is another thing entirely.  It was smart of Johns to bring that real world aspect in to the book.  It just makes Aquaman that much more relatable.  Here he is saving the day, but people are still not giving him the respect he deserves.  I think we all feel that way sometimes, and I hope that we deal with it as well as Arthur Curry.

I have heard that Aquaman was the best New 52 comic book, and after reading the first trade paper back I can see why.  It looks great, and it tells a great story about an underappreciated hero.  I hope that he is given the respect he deserves in the upcoming Justice League movies, so that he will thought of as more than just the guy that can talk to fish in the future.

One Reply to “Aquaman Gets The Comic Book He Deserves”