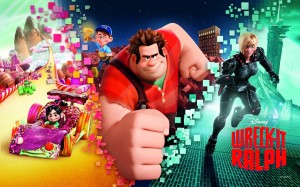 Wreck-It Ralph is a Computer Animated film from Disney Animation Studios.  It was nominated for Best Animated Film in this year’s Oscars, and many thought it should have won over Brave.

Wreck-It Ralph starts with narration from Wreck-It Ralph describing how he feels disrespected, and how thirty years of being the bad guy has taken its toll on him.  It turns out he is at a support group for video game bad guys, and they tell him to tough it out and embrace what he is, but when he gets back from the meeting it turns out the other characters from his game have thrown a thirty year anniversary party without him, so he runs out to try and prove that he can be a good guy, and should be respected.

It is obvious that all the people involved love video games.  They put in cameos from various games as well as the way they designed the games for the movie all show a great understanding of video games.  It is also fun to see this video game take on Toy Story: what happens to your games when you leave the room.

The characters, despite being from video games, are all believable and well cast, and the animation is smooth.  John C. Reilly gives Ralph’s voice a lot of heart and you believe his personal struggle to get a little love.

The Blu-Ray looks great, as most computer animated films do.  With high detail and vibrant colors. Watching a Blu-Ray like this always reminds me that even HD streaming can’t compare to disks yet.

The story may not be grandiose like a lot of other movies try and be, but it is a movie about respect and friendship, and that can be just as interesting as an epic saga.  The non-Pixar part of Disney Animation has been getting better, and Wreck-It Ralph continues this trend.