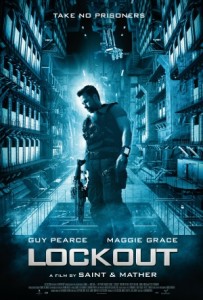 Lockout is a French film staring Guy Pearce.  It is an “original” idea by director Luc Besson.  So did the French make an action movie worth watching?  Yes, but only if you are in the right mood.

The plot behind this movie is Escape from New York in space, and for those that have not seen that movie or Escape from LA it goes something like this:  A framed Secret Service Agent has to go to a maximum security prison orbiting the Earth to save the President’s daughter from the psychopaths that have taken over to win back his freedom. This is why “original” was in quotes above.

Sadly Luc Besson is no John Carpenter, so this movie’s direction is a little sloppy, and uneven, but what is good is Guy Pearce channeling Kurt Russell’s Snake Plissken.  He is witty and funny, and the good/jerk that action movies love.  It is a shame that there weren’t better people making this movie around him because it could have been a real action gem.  Maggie Grace as the President’s daughter does her best to be a spring board for Pearce’s jerkiness, and holds her own for the most part,  but Pearce is definitely the star here.

Despite the failings of the production staff around the actors, the action is still good, and the actors do their best with what they are given, and if you are in the mood for a cheesy action flick, then this is a pretty decent option, and it is on most streaming services, so it won’t cost you a dime.

3 Replies to “Don’t get sent to Lockout”