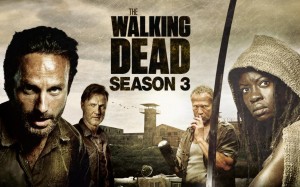 I wasn’t going to write this post, since I don’t know how much I can share without spoiling things, and I have mentioned the Walking Dead on my site before, but my wife said I had to, and it is best not to argue with your wife when it can be avoided.

Season 3 ended on a high note.  It was tense and full of action just like we all wanted it to be, but there are still some moments that make you scratch your head, and make you think that just possibly the writers are making it up as they go along.  I think that can be said for the whole season as well.  The show has such epic highs that we tend to gloss over the fact it can be uneven at times, and even make the zombie apocalypse boring here and there, but then they have an episode like this to wrap up the season and all is forgiven, and it will be a painful seven months until the show returns.

<Spoilers>  I like where the show ended up.  With Woodberry and The Prison merged, and The Governor no doubt out raising his new army somewhere. </End Spoilers>  It is an ending that lets you feel this season is over, but still interested in what is going to happen next season, and I am.  It may be that the only way I will be able to wait the next seven months out is to re-watch the show from the beginning.