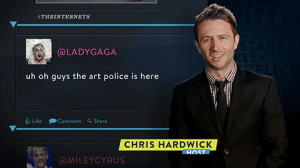 Since I watch a lot of The Walking Dead, I also watch The Talking Dead hosted by Chris Hardwick.  On his show one of his guests mentioned that he was going to be on Chris’s other show @Midnight, and since I find Chris funny I decided to check it out.

The premise is that Chris gathers up three comedians, and they make fun of the random stuff that happens on the web and social media.  By playing silly games they get to find out who the funniest person is in the world for the next twenty-three and a half hours.  The games range from hash tag wars, where they add hash tags to random tweets to make them funnier.  To AMA Answers, where they will answer Reddit AMA questions that the person doing the AMA chose to ignore.

There is a lot of junk on the internet, so this show has a lot of material to work from, and the people they get on the show are usually pretty funny.  It can get a little to risqué sometimes, but so does the internet.  The show is as you guessed on at midnight every weeknight on Comedy Central, and it is worth checking out.