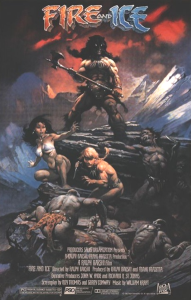 Fire and Ice is a 1983 movie directed by Ralph Bakshi.  It was the Online Film Critics Society, 99th greatest animated film of all time.  It was also a major box office bust.  What did I think of it? Meh.

The plot is that there are two major strongholds: Icepeak on a giant moving glacier led by Lord Nekron and his Mother, and Firekeep in the mountains with the volcanoes led by King Jarol.  The people on the giant moving glacier are declaring war on everyone else, and captured the princess of Firekeep, Princess Teegra, to try and force Firekeep to surrender.  Meanwhile a young man, Larn, finds the princess and hopes to rescue her.  It is pretty much a Conan rip-off, except animated, and nobody wears any clothes.

This film does uses the technique of rotoscoping, where they film live footage and then pencil over it give it a smoother look in action scenes, and it gives it that Conan comic book brought to life vibe.  Sadly this movie lacks any real substance, and is just watching a bunch of mostly naked people run around and do heroic things.

I hear that they are thinking about remaking this movie, but I don’t see why.  It seems you could make any barbarian movie, and have it be just as good without buying the rights to this film, and everyone would be happy.

If you are hard up for barbarian action, or a big fan of the Conan comic books and want to watch something with that esthetic then this might work, but I would skip it otherwise.

One Reply to “Watch Out When Fire and Ice Meet”