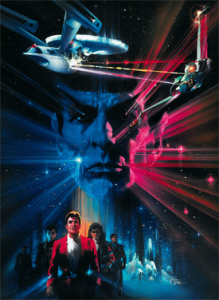 Star Trek III: The Search for Spock is the first Star Trek movie directed by Leonard Nimoy, and even the though it is the third Star Trek movie it is really the second movie in a trilogy of sorts that ends in the next movie Star Trek IV: The Voyage Home.  So how does Nimoy fair in his directorial debut? Not bad, but not great.

This movie directly follows Star Trek II: The Wrath of Khan‘s plot, so Kirk’s son is checking out the new Genesis planet, and Kirk is home mourning the loss of Spock, when Spock’s dad rushes in to Kirk’s apartment and asks why he left Spock’s body on Genesis, and why they didn’t meld minds at the end of Spock’s life to do some kind of Vulcan mind backup.  They soon discover that Spock backed up his mind in Dr. McCoy’s head, so they get McCoy, steal the Enterprise because Star Fleet is going to trash it, and are off to save Spock.  Also, Christopher Lloyd plays a Klingon trying to take Genesis as a weapon.

That is the type of plot you get when you realize killing off Spock, a major draw to your franchise, is a bad idea, so you have to unkill him, and the plot is really the weakest part of this movie.  The actors do a great job with what they are given, but the story really is just a way to bring Spock back from the dead.  Nimoy does a pretty good job as the director, and it is not hard to see why the kept him on to direct the next film.  He is definitely better then Shatner, but we will get to that later.

This movie is pretty good, despite just being way to have Spock back, and we all know that without Spock we couldn’t have had the latest Star Trek movie, so it is an important film for that reason alone.  It is not the best Star Trek movie, but there are much worse.

One Reply to “Is The Search for Spock Successful?”