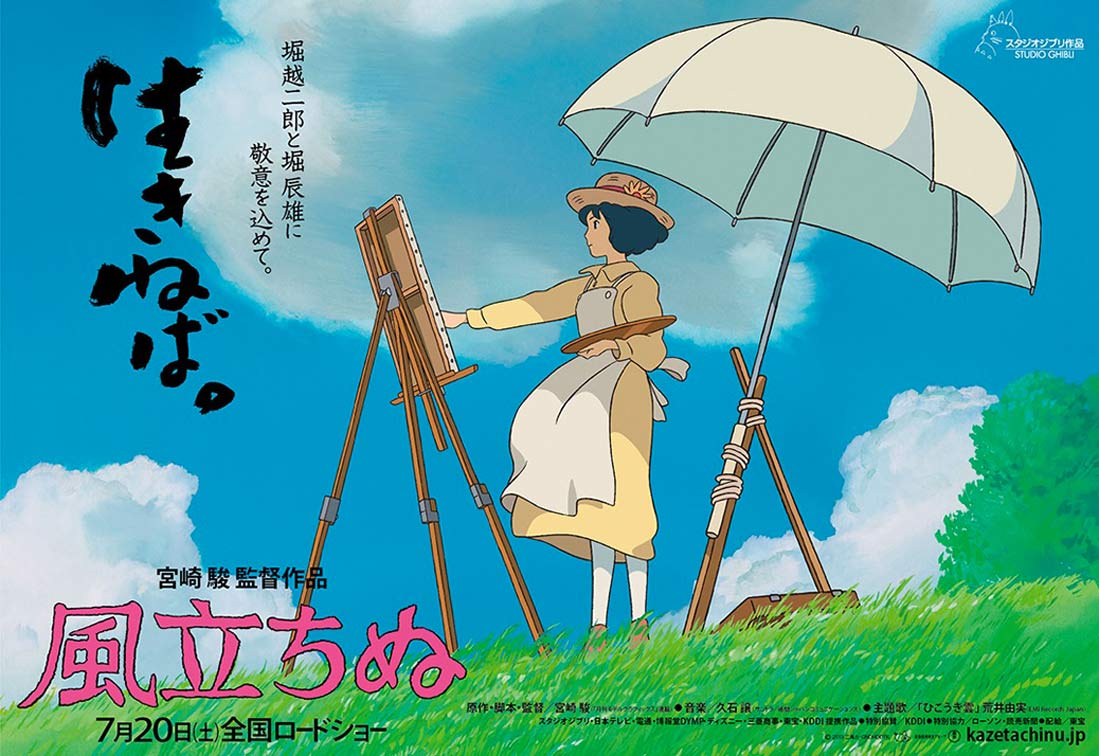 The Wind Rises the 2013 film by Studio Ghibli, and the last feature length film directed by Hayao Miyazaki, is a hard film to review for me.  It was long and confusing, and as a biopic almost all of it was made up, but still it was lush and beautiful.  It is the type of film that reminds us just what hand animation is capable of.

The film follows Jiro Horikoshi (Hideaki Anno, Joseph Gordon-Levitt) on his journey to build beautiful planes.  His life is consumed by his dream, it is all he wants to do.  Though his dream is cursed, and his magnificent creations will one day fight a war that will destroy his nation, but still it is a dream he cannot put aside.

For the most part I don’t mind it when movie studios twist the truth a little bit for a biographical film.  It is an entertainment medium after all, but in this case other than the fact the Jiro creates planes, none of the film was true, so that was a bit disappointing for me.  Still it did get me to look in to his life, and without this movie I never would have done that otherwise.  Also because of all the dream sequences and time jumps it can be a little hard to follow, but the dreams featuring fellow plane designer Giovanni Battista Caproni (Nomura Mansai, Stanley Tucci) were by far the best parts of the film, so I guess I can’t be too upset.

The main selling point for this film is the amazing artwork.  It is like watching a moving painting.  Any time I got frustrated with the slow pace, or the slightly wonky story, I was always captivated by the art.  Miyazaki always creates a version of the Japanese countryside that I long to visit.  In the words of Liz Lemon, “I want to go to there!”  I am not sure that part of Japan even exists anymore, but Miyazaki has brought it to life for me anyway.

The cast, as is usual for a Studio Ghibli film, is staller.  They got Joseph Gordon-Levitt, Stanley Tucci, Emily Blunt, John Krasinski, and William H. Macy just to name a few.  Due to the tone of this movie they all give subdued performances, but it is nice when a film like this gets a great cast to bring it to life.

The Wind Rises is not a perfect movie, but it was a movie I enjoyed anyway.  I would have liked for Hayao Miyazaki to go out with a bang, but instead it was a light touching movie, and since that is what he is known for, maybe that was for the best.  This movie invites you to dream with Jiro Horikoshi, and it is a beautiful dream at that.