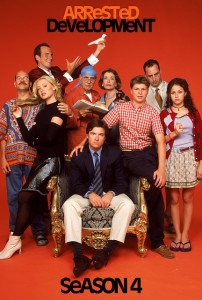 After a long hiatus the Bluths are back on TV, well the internet anyway since their show is now on Netflix.  Did the show manage to recapture the humor and wit of the show’s original run?  I think it did.

The Bluth’s have all gone their separate ways after the events of the third season, and they are all now trying to put their own lives back together. Each character has their own episode or two explaining what they have been up too, and all the shows take place during roughly the same time period, and explains how they end up on a pier for a party known as Quattro de Cinco, and as the different stories intertwine it shows how different seemingly random things that happen each character are caused by a different character.

It is good to see all the characters back and being the losers we have all come to know and love.  They are all still funny, and now that they are pretty much fending for themselves they are having a hard time navigating life.  The actors have their roles down pat, so there is no need to worry that they changed anyone.

The writers did not seem to skip a beat.  They throw so much funny stuff at you it is impossible not to laugh at the family.  They also managed to work in almost every side character from the show in to this new series somehow.

So if you have not watched it yet, I would recommend that you do.  It is a lot of fun, and I hope the Netflix picks up the fifth season.

3 Replies to “The Return of Arrested Development!”