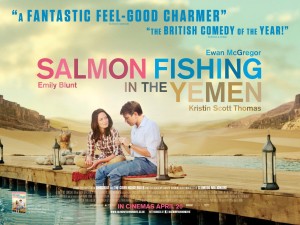 Salmon Fishing in the Yemen is a 2011 film by Lasse Hallström (What’s Eating Gilbert Grape).  It was nominated for the Best Picture Golden Globe.  I don’t watch a lot of romantic comedies, but it was a nice change of pace.  It was not without issues however.

The movie starts off with the British fisheries office getting a question from a Yemeni sheikh (Amr Waked) about planting salmon in the Yemen river, which of course the fisheries office says is impossible due to the heat, but when the UK needs a feel good middle east story they tell them to at least try, so Doctor Alfred Jones (Ewan McGregor) teams up with the sheikh’s account manager Harriet Chetwode-Talbot (Emily Blunt) to try and make it happen.

This movie mostly works because of how likable Ewan McGregor and Emily Blunt are.  They make a perfect on screen couple and you just want them to get together, but here comes my nitpick with the story, Ewan’s character is married, but the movie makes you happy that he is leaving his wife behind even though she hasn’t done anything wrong, so it makes the romance leave a bad taste in my mouth.

The cinematography is wonderful in the movie.  With the vast Scotland and desert shots, and then all the wildlife imagery is fantastic.  It just makes this movie all the more visually inviting.  Lasse Hallström knows how to shoot a movie.

Like I said this movie works mostly due to how much you like the two leads, and the entire movie is so warm it is like curling up with a warm blanket, but it is shame the way they handle Dr. Jones wife it makes the whole movie feel a bit off.

2 Replies to “Shmee tries Salmon Fishing in the Yemen!”