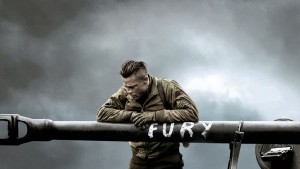 Fury came out in 2014, starring Brad Pitt, motivational speaker Shia LaBeouf, Logan Lerman, Michael Pena, and Jon “Shane” Bernthal as the tank crew of the Sherman Battle Tank FURY. I’ll cut to the chase… I didn’t like it. Fury when it is an actual war movie is tense and brutal. Fury when it is being introspective is awful and stupid. The fighting is done in the new style of Hollywood war films – brutal, bloody, and dirty. This makes the climatic set piece, the part we suffer through the rest of the movie to get to, really quite good. The battle is intense, swinging from hope to despair and then back again with each attack. It’s that desperate Alamo-like last stand we just love in ’MERICA!!! The rest of the movie is the standard Hollywood post-Vietnam war movie that makes every effort to suck the heroism and even humanity out of the soldiers the movie is portraying. Except for Lerman’s wide-eyed clerk turned machine gunner, the rest of the crew of Fury are terrible people. Even the soldiers around and intertwined with the events of the film are terrible people. I don’t doubt that American soldiers killed prisoners in World War 2, but I find fault with the movie’s depiction of soldiers reveling in it.

To me the film was trying to show how war changes those who fight in it, but it does it without us seeing who the men were before the war. For all we know they were all terrible people, the Army just gave them license to kill. So we don’t see the loving family man, the idealistic college student, the friendly mechanic, or the pride of the family go off to war and have their lives forever changed. HBO’s Band of Brothers and American Sniper do a much better job at showing how war changes lives, without glorifying war or wrapping war up in an idealistic American flag.

3 Replies to “The Paladin wants off Fury”