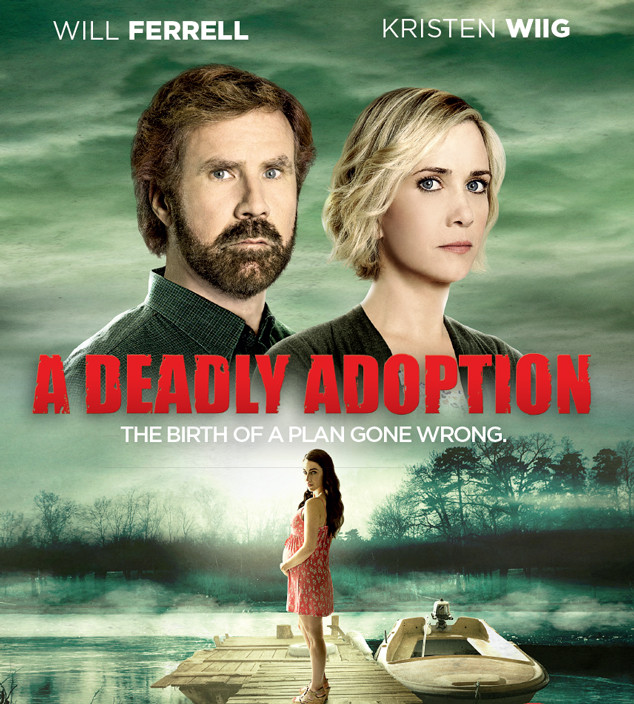 Well you have to hand it to Lifetime, at least they were smart enough to be in on the joke.  A Deadly Adoption makes fun of their cheesy melodramatic movies perfectly.  Had Will Ferrell and Kristen Wiig went full on farce, this movie never would have worked, but instead Ferrell and Wiig played it straight.  Proving that in the right context Lifetime Original movies are funny enough on their own.

A Deadly Adoption is about a rich couple, (Ferrell and Wiig) that after a tragic dock accident at their diabetic daughter’s one year birthday party are no longer able to have kids, so when a seemingly nice young pregnant woman (Jessica Lowndes) arrives from the adoption agency they invite her in to their home for her last trimester (it is the only logical thing to do).  Things get deadly, as the title promises, after that as you can assume.

This story was perfect for a spoof of Lifetime movies.  The tragic accident was nothing more then a slip in to the lake, Jessica Lowndes character’s motivations didn’t make a lick of sense, and they talked about the daughter’s diabetes non-stop just in case you somehow misted it.  Plus they assure you that it is all based on a true story.  I assume they took it on faith that at some point a pregnant woman has fallen in a lake.  I don’t know who green-lit A Deadly Adoption, but they deserve a hug.

Ferrell and Wiig play the leads with the perfect amount of over the top serious cheese.  If you didn’t know who they were you may even get through A Deadly Adoption thinking it was just another Lifetime Original with some even odder than normal moments.  However, just their presences in this movie makes it hysterical.  It is like them being in it gives you the freedom to laugh at the craziness of this movie, and the Lifetime movie formula in general.

I am sure this movie will be replayed a lot by Lifetime, so if you missed it, do yourself a favor and watch it next time it is on, or rent it when it comes out to DVD or VOD.  It is not often people are intelligent enough to make fun of themselves, but Lifetime really went for it by getting Ferrell and Co to do A Deadly Adoption for them.  They actual made a Lifetime Original must watch TV by making fun of Lifetime Originals.  I can only hope someone over at Hallmark was watching!