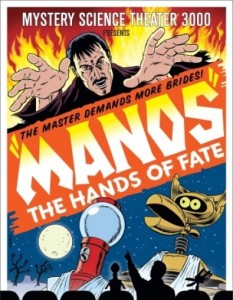 “Manos” The Hands of Fate is considered among the worst movies of all time.  Most lists have it as number two below the classic Plan 9 from Outer Space, but you could defiantly make a case for Manos as number one.  Though number two may be a good descriptor for the movie.  It was written, directed, and stared in by Insurance and Manure salesman Harold P. Warren in 1966, but it was almost completely forgotten until MST3K found it, and it is one of their best episodes.

The movie starts with a young family on their way to a vacation at Valley Lodge, but they get lost and end up in the desert, so they ask to stay with the creepiest looking hillbilly of all time named Torgo, but at first he doesn’t want to let them because The Master doesn’t like dogs or kids (even though The Master has a dog), but he relents and lets them stay.  What will happen when The Master finds out?

You know your in for a good movie when the movie starts off with like fifteen minutes of camera out the window driving shots, and the characters have to beg to stay with a creepy guy who works for a person he calls “Master”.

Everything is bad about this movie.  There is no script and the “actors” have to repeat the dialog to fill time, and to call it dialog is an insult to writers everywhere.  The sets are someone’s small living room, and a place in the desert with pillars where The Master and his Wives live.

I hope Warren was a good Manure and Insurance salesmen because he was an awful director.  He never framed his shots, and anytime he showed the “actors'” faces they were bad close ups it is like he had never seen a movie before and he was making up something new as he went along.

It is safe to say the Joel and the Bots had a field day with this movie.  Every seen has so much to make fun of, and the movie is so strangely bad that you can take your eyes off of it much like a train crash.

“Manos” The Hands of Fate is so bad that I think everyone should watch it at least once it will make you appreciate how good most movies are.  This is streaming on Amazon Prime so there is no reason not to see it, other then fact it is really bad.

5 Replies to “The Mother of All MST3Ks: Manos: The Hands of Fate!”