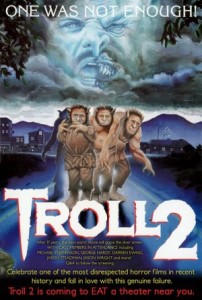 Troll 2 is one of those amazingly bad movies that it is so impossible to believe it got made and released.  It is defiantly one of the worst movies of all time, and one of those rare treats that is so bad that it is good, especially when watched with a good group of friends.  It was released in 1990 and directed by Claudio Fragasso.

The story is about a family that decides to go to a farming town Nilbog (goblin backwards) for vacation, only to find that the place is full of goblins, and that the goblins are vegetarians so the people have to eat some green stuff to turn in to plants so the goblins can eat them.  Oh yes, and the son Joshua is haunted by his grandfather, who for some reason knows everything about goblins, and thus can help his grandson out.  Notice I did not type the word “Troll” at any point because there are none in this movie, and it has nothing to do with Troll 1.

The goblins are supposed to be scary, but it seems that in most situations they pose no threat to anyone because they are slow and only have spears that they can throw at people, but they only do that once, and I would remiss if I did not mention that there is a scene in which two people make out with a piece of corn between them and it turns in to popcorn, yes that happens.

The fact that a studio paid someone to make this movie boggles my mind, at least with Manos: The Hands of Fate it was just a bunch of people getting together to make a movie, and then realizing that was something they did not know how to do, but with this it was supposedly made by professionals, and had real funding.  Not a lot probably, but more than the bologna sandwich that saves the young boy at the end of this film.

Rarely do movies like this see the light of day, and if they do get published they land on the direct to video isle, or stuck on late night TV as a joke, but every once and awhile a movie this bad reaches the public at large and it is hilarious.