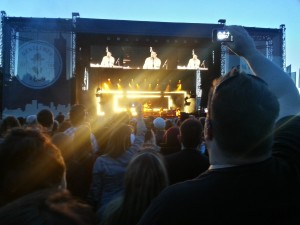 I am going to start off by saying Mumford and Sons puts on an amazing show.  They rocked Holland Park in Surrey B.C. for a good hour and forty minutes, but I will get back to that.

The venue Holland Park is great place to watch a show.  The area has cheap parking nearby at the shopping center and the Sky Train station as long as you get there when gates open.  It is open and there is space to move around, plus they have a ton of good food vendors.  The biggest downside is that the stage is not tall enough or they need to dig out the stage area, so it is easy to have a large person or a girl on someone’s shoulders block your view. but it does handle the 25,000 guests well.

The first band the Mystery Jets went on just an hour after the gates opened, so we were still milling around and getting food during their show, but it was good.  They have a very 70’s rock feel, and play and sing well.

The next band or singer I should say Michael Kiwanuka has a good soul voice, and was great to hear.  I will be on the lookout for his stuff in the future.  My only problem with his show is that he needs to pick his set list better because he started off with some great crowd moving tunes, but then went really slow and soulful, which was good, but sucked the life out of the crowd.

That brings us to main event.  Mumford & Sons put on amazing show from beginning to end.  They played all the songs off their last two albums, and the order they put them in really kept the crowd in to it.  They sound better live than they do on their CDs.  It was great!  Their set design was sweet with cool light rigs and the sound guys did a fantastic job, so atta’boys all around.  If you ever get the chance to see them live, do it!  You will not be disappointed.

It was a great night and a lot of fun, but a word of advice.  If you are ever thinking it is midnight so it should be ok to take the Peace Arch crossing, DON’T!  It took two hours because they only had one lane open, and with the new red light turn your car off policy it felt even longer.