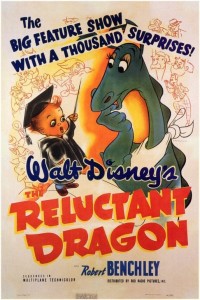 The Reluctant Dragon is an old Disney movie a lot of people may have missed, or even forgot they had seen.  It is a guided tour of Disney’s old Burbank animation studio.

The movie starts as Robert Benchley is being read a book, The Reluctant Dragon, by his wife, and when she finishes she tells Robert that he should try and sell the book to Disney, because you can sell books written by other people I guess, but it was 1941 so who knows.  When he gets to the Disney lot he decides to skip out on the guided tour and check things out for himself while dodging his guide.  It also turns out that Benchley is a bit a perv.  He tries to sneak a peek at a model during an art class, but is disappointed to find an elephant instead of a girl, and then he steals a zebra centaur girl clay model that is nude from the zebra up.  There are also various Disney shorts that play while he makes his way around the lot.

It is an interesting film and considering it is not a full length animated movie it is surprising that RKO decided to distribute it to theaters.  It was fun and light hearted, but it did drag from time to time.  I hope if I ever get to go to Disney’s animation studio that everyone there will be just as friendly to me.  Maybe if I bring someone else’s book to sell they will be happy to see me.

I don’t think this movie is a must watch by any stretch of the imagination, but it was kind of a hard title to track down, so I am glad Disney put it on Netflix so people can take a trip down Disney’s memory lane.  I hope more forgotten classics come to streaming services like Netflix, so they don’t disappear from the public’s consciousness.