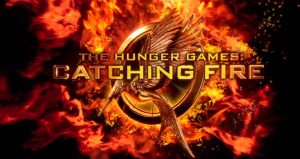 The Hunger Games: Catching Fire is Lionsgate’s 2013 sequel to the 2012 film The Hunger Games, and it does everything that a sequel should:  It builds on and makes better just about every part of the first movie.  I was a little worried when they started production without a finished script and a new director Francis Lawrence, but my concerns were apparently unfounded.

The story picks up fairly soon after the first movie with Katniss Everdeen (Jennifer Lawrence) and Peeta Mellark (Josh Hutcherson) back home after their survival of the last Hunger Games.  They are trying to adjust to their new lives as Victors, when they are swept away on a tour of the districts.  Tensions are running high in Panem and the people see Katniss as a symbol of hope against the tyranny leveled against them by The Capitol.   Can Katniss keep her family safe as the 75th Hunger Games and 3rd Quarter Quell (Every 25th Hunger Games) approach?

Jennifer Lawrence is amazing in this film.  It would be so easy to play Katniss as a mopey jerk, but she brings so much more emotion to this role it is just wonderful.  Josh Hutcherson must have gotten an acting coach because he has gotten much better.  He gave Peeta a little more life this time, and since Peeta is such a Boy Scout any nuance that he can be given the better.  The other actors all breathed a little more life in to their characters this time around as well which made this world much more believable.

Francis Lawrence thankfully erased all the shaky camera work from the first movie, so for that reason alone it was worth changing up the directors.  He also used his much larger budget well.  The special effects and the editing were great, the world of Panem seemed like a real place.  This is one of the rare movies that didn’t feel a little too long, or like they skipped too much of the story to tighten up the running time.  I hope that they tie Francis Lawrence up for the next two movies.

If you liked the first movie than you will love this movie, but even if you were not a big fan of The Hunger Games you should still put this movie on your watch list.  It is not only one of the biggest hits of this year, but it is one of the best films of the year too.  I can only hope that they can keep the quality up for the next two movies, because if they can we are in for a real treat.