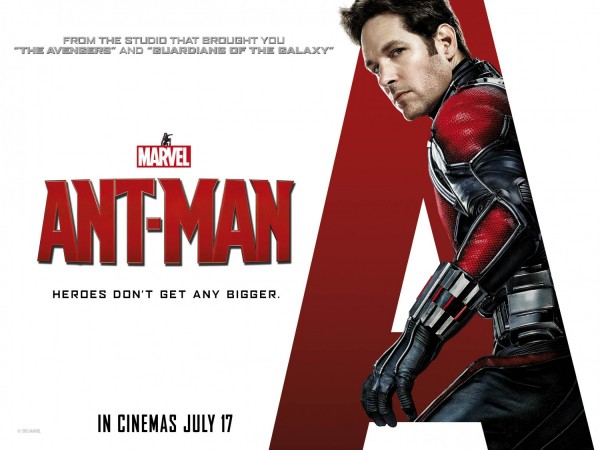 I have to admit Ant-Man was the first Marvel movie that I was worried about.  After loosing a director, and then going through massive rewrites, I thought this was going to be Marvel’s first major flop since the Incredible Hulk.  Somehow though they still pulled it off.  Ant-Man is an amusing addition to the Marvel Cinematic Universe, and while I don’t think this will be anyone’s favorite Marvel movie, I do think most people will enjoy themselves.

Ant-Man is about cat burglar Scott Lang (Paul Rudd), and how he learns to be the Ant-Man from the man who used to carry the mantle for S.H.I.E.L.D, Dr. Hank Pym (Michael Douglas).  Scott is tasked with keeping Dr. Pym’s shrinking technology out of the wrong hands.  In other words Hank needs Scott to steal some stuff for him.

While Ant-Man is yet another superhero origin story, this time it has the twist of being a teacher/protégé scenario.  Honestly, anything they can do to mix things up a little is appreciated.  Though I think the real reason for this is that Scott Lang in the comic books is the wisecracking and fun Ant-Man while Hank Pym is a mean jerk.  Wisecracking and fun works well with the current Marvel movie hero mold.

Which is one of the main issues with this film.  While it is more of a heist movie than a straight-up superhero versus supervillain movie, it doesn’t really try to break out of the current set of Marvel movie conventions.  When watching this film there is no doubt who is responsible for it.  My other issue with this flick is that this really should have been a Wasp movie, or whatever they are going to call Hope van Dyne (Evangeline Lilly) when she suits up, and she will.  I mean she helps train Scott for crying out loud.  They try and explain/hand-wave it away, but never to any real satisfaction.  Though I guess the real reason is that they wanted Ant-Man not Wasp.

Paul Rudd showed why Marvel is going after all the likable comedic actors for their films.  He is instantly charming and easy to root for even though his character has a somewhat checkered past.  Michael Douglas works well as the frustrated ex-superhero trying to impart his talents on his replacement.  While Evangeline Lilly does a good job with her role, her character as mentioned above is kind of wasted, or at least misused.

Ant-Man isn’t going to be thought of as the greatest Marvel movie ever, but the fact it is as good as it is, is a testament to how well the Marvel movie formula works.  It is an action-packed often silly adventure.  If you like what Marvel has offered in the past, you will like Ant-Man.  If you were never a fan or have superhero fatigue, Ant-Man will not be for you.  I however, had a great time.