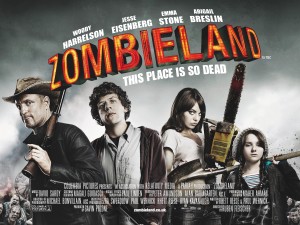 With Brad Pitt’s new zombie movie doing well in theaters I thought I would watch one of my favorites zombie movies Zombieland.  It came out in 2009 and it was directed by Ruben Fleischer, and written by Rhett Reese and Paul Wernick. I love this movie because it adds some humor to the zombie lore.

The movie follows Jesse Eisenberg’s character as he at first is trying to get to Columbus, and is so named for the rest of the movie, but he soon meets Tallahassee (Woody Harrelson), Wichita (Emma Stone), and Little Rock (Abigail Breslin) and he decides to follow them.  He has survived the zombie apocalypse by living by thirty-two simple rules that will flash up on the screen when his life is being saved by them or someone is dying because they didn’t follow them.

This doesn’t sound like a funny setup to a movie, but the humor comes from them not trusting each other, and the crazy things they do with and too the zombies.  Plus since these characters have lived so long with zombies, the undead don’t pose a huge threat to them until they are cornered.

The actors all do their jobs well.  Woody Harrelson plays a man who has lost everything, so he has decided to destroy the zombies with glee.  Jesse Eisenberg’s has never trusted people so not trusting zombies comes naturally, and Emma Stone and Abigail Breslin play two sisters that are just looking out for each other.

The special effects in this movie are great too.  The zombies look like zombies and they are satisfyingly gruesome, and they explode wonderfully when hit by bullets.  They must have used a ton of cornstarch in this movie, but that is the way it should be, and Columbus’ rules are always popping up at the perfect times for maximum humorous effect.

This movie makes me laugh the whole way through, but they made the characters lovable, so you actually care if they survive or not.  If you are looking for a great movie that provides tons of laughs and a couple scares then look no further than Zombieland.

One Reply to “I revisit Zombieland!”