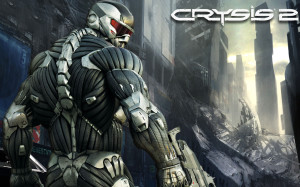 Since I have been upgrading my computer, I have been playing a few computer games I have had kicking around, and one of those games is Crysis 2 by Cytek and published by EA.  I got it during a Steam sale awhile ago, and I just never got around to playing it.  It came out three years ago, so you have probably either played it or decided to skip it, but I thought I would my thoughts on it anyway.  That is kind of what I do on this site after all.

The plot in Crysis 2 is that you are wearing a super suit that allows you to try and save humanity from aliens, and a group of crazy people are trying cover up the alien invasion, or something like that.  Honestly I am not totally sure why I am killing a bunch of humans during an alien invasion, but they are bad, and this is a first person shooter, so they must die.

My problem with this game is that at first you really don’t feel that super.  You have to keep finding alien DNA to upgrade your abilities.  Which fine, but I want to feel awesome from the get go, and I don’t want to have to hunt down a bunch of aliens to get better.  Plus in the first game it was wide open, and I could complete my objectives in any way that I wanted, but in this game I am kind of stuck just moving forward and shooting.

On the plus side the shooting is good, and you can customize your weapons.  The graphics also hold up well, and I am sure they would look better if I wasn’t playing the game with a Radeon HD5770.  When I get my new graphics card I will have to fire it up again and compare the visuals.

The first Crysis blew me away with its crazy graphics, and cool abilities.  It had a wide open world to explore, and it let me choose my path.  This game feels like a step back in every department.  It is still fun, but I find it lacking anything great that makes me want to keep playing.

One Reply to “Shmee’s Thoughts On Crysis 2!”