I am continuing to slowly upgrade my computer (well actually pretty much replacing it), so the next three components I got, were the motherboard, RAM, and CPU.  First up lets talk about the foundation of it all the motherboard: 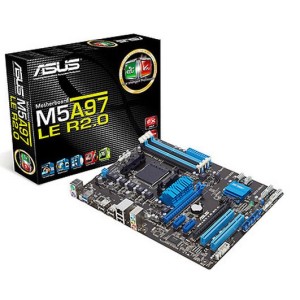 After a bad experience with other board makers, I pretty much now only use Asus boards.  Their customer service is kind of lame if you ever do need to call them, but their parts are usually so good that you don’t have to anyway.  This board had exactly what I wanted: gigabit Ethernet, USB3 ports, a decent sound card, it supported the CPU I wanted, and it was cheap.  It ended up being even cheaper thanks to a rebate offer.

It has a great BIOS, which I updated as soon as it started up, that allows for complete control over all your components, and extremely easy overclocking tools.  What I liked about this thing is that it just worked the way I wanted it to out of the box.  I didn’t need to play with anything, or toggle a setting, it just got my PC up and running.

The only downer is that it didn’t have a USB3 expansion port for the front of my case, but that wasn’t a feature I wanted to spend $20 on.  I installed this three weeks ago and it has been rock solid, so if you are looking for a good low-mid level gaming board for AMD processors, you should put this on your short list. 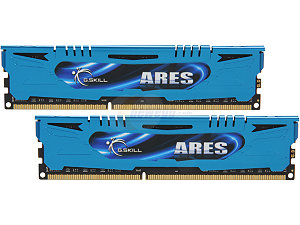 I don’t have a lot to say here other then this is some pretty fast RAM.  I got the Ares version of the G.SKILL RAM family due to the fact it has low rise heat syncs, so I can put whatever components I want in my computer, and I don’t have to worry about them running in to the giant RAM chips sticking out of my MoBo.  Like all DDR3 RAM chips that function above 1333 MHz, I did have select the 1866 MHz speed in my BIOS, but other then that they have been completely trouble free.  I have never had problems with G.SKILL RAM, and it looks like that is still the case. 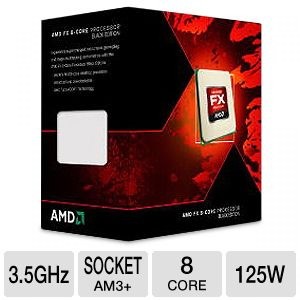 Everyone that builds a mid-range gaming computer these days uses the Intel i5 series processors because they are fast, and they don’t consume a lot of power.  I however am an AMD fanboy from way back, so I will take the hit in power costs, and a little hit in single threaded processing power to use an AMD chip.  If you don’t care who makes your chips you should probably use an Intel i5, but if you do get an FX-8320 you will still be very happy.

It is fast enough, it has eight cores, and it is unlocked so you can overclock it as much as you feel comfortable with.  In just playing around, I got this chip to over 4.1 GHz without too much effort.  I didn’t leave it at that speed because I still only have to stock cooler, and didn’t want to burn it up, but when I do get a better cooler I will have this chip clocked well over the 3.5 GHz stock clock speed.

And I will totally be getting a better cooler.  The stock cooler is fine when the computer isn’t working hard, but once you start doing something fun it sounds like a hoover vacuum cleaner.  I suppose they just throw in a cooler to make it a complete set, but they must know guys like me will not use them for long anyway, so why bother including something good.  Still the chip is cheap at under $150, so even with the price of a decent cooler, you still haven’t spent $200 yet, and that is a pretty good deal.

There are my three computer hardware mini reviews, and I hope you found them somewhat useful.  I still have a cooler, and a video card to go to finish this computer off, and I will let you all know how it goes!