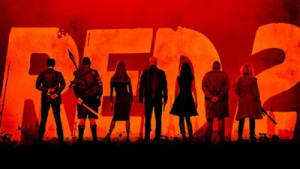 When the movie RED was a surprise hit for Lionsgate in 2010, it surprised no one that they made a sequel RED 2 in 2013, but sadly it lacks all the fun and charm of the original.  Movies like this are why sequels get a bad rap.  It has no new ideas, and it seems like everyone is in it just to get paid.

The plot starts a little while after the first movie and Sarah Ross (Mary-Louise Parker) is getting bored now that her boyfriend Frank Moses (Bruce Willis) is no longer taking her on dangerous missions.  Luckily for her their old friend Marvin Boggs (John Malkovich) shows up and gets them all wrapped up in another adventure.  Which much like the first movie is them running from the CIA who wants to kill them, again, for some reason.  While on the run they will meet old friends, and have to team up with some new ones.

RED 2 is pretty much a worse version of the first one.  In RED it was fun watching old agents kicking butt and making people pay for coming after them, but to watch the same thing over again is pretty lame.  If you don’t have a new idea for a sequel you shouldn’t make it.  It is a shame too since RED has a good cast, and there is all sorts of spy stuff they could have done.  The only thing they did better in this movie are some nifty hand to hand fight scenes.

Speaking of the cast, none of them really bring any life in to their roles this time around.  They all know this is a cash grab, so they just put on their smug spy faces and get the movie done.  The only one that seems to be having any fun is Anthony Hopkins as a crazy doctor who makes weapons of mass destruction, but this is his first time around with RED, so maybe it was all still new and fresh for him.

The worst part of this movie is how forgettable it is.  I watched this movie weeks ago, but the reason I am reviewing it now is because I had forgot I watched it.  That is not a good thing for a movie.  Since they didn’t have a good script for this movie they should have just skipped it.  With this cast, had they tried a little harder they may have had a viable franchise on their hands, but it is to late for that now.  I am pretty sure this movie killed any chance for a RED 3, and after the snoozefest that was RED 2 nobody is sad about that.