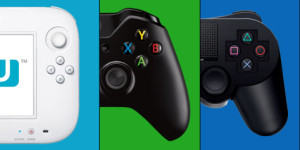 So another E3 has come and gone, and I thought I would give my impressions of this year’s show.  I am always more interested in the show when new hardware is launched because it lets me know what kind of financial planning I need to do.

This year the big three went with three totally different strategies to selling their hardware: Nintendo decided just to focus on their own games, Sony just decided to keep things they way they are but bump the specs, and Microsoft decided to change the whole way games are bought and sold and not to everyone’s liking.

Nintendo did show off some good games this year, but they are all games that we knew they were making, like a new Smash Brothers, a new Zelda, a new Pikmin, and so on and so forth, but it was all a little uninteresting.  They also didn’t have a choice in the matter with big companies like EA stopping support of the console until it can prove its value.

Sony came to destroy Microsoft this year.  That was their goal and they mostly succeeded.  They came in a hundred dollars cheaper at the cost of not including their new upgraded Playstation Camera with every console, and the games you buy in disc format you can do whatever you want with.  These things pretty much won E3 for the company.

Microsoft decided that it was time to shake up the way console games are bought and sold.  When you buy a game you install it on your console, and then the key that comes with the disk are tied to your account, so say you loose the disk, who cares, you can download it again from Xbox Live.  The problem is that this restricts selling the game to someone else.  You can give the game to a friend if he has been on your friends list for thirty days, or there is a family sharing program, so you can have ten friends or family members that you can share your games with no questions asked, but if they are playing one of your games you cannot play it at the same time.  You can also sell your game back to authorized retailers as well.  This really doesn’t sound that bad, and I especially like the friends and family sharing, but the major downside is that your console has to call in and check your games’ licensing every twenty-four hours otherwise you can’t play your games anymore.

Microsoft obviously needs a new marketing department.  Checking in every twenty-four hours to play games that you own is lame, and it shows that they don’t trust their customers, but that being said that, having an all digital store does make things better.  I love the friends and family sharing idea, and being able to loose my disk but not my content it perfect.  They also must have won some fans with this scheme since EA is make two exclusive games for the Xbox One: Titanfall, and Plants Vs Zombies: Garden Warfare, Metal Gear V is a timed exclusive, and Square is bringing all its games to the Xbox One as well as the PS4, and that has not been the case for quite some time.

Then comes the camera deal.  Sony decided to leave it out so that they could kill the Xbox on price, but I think it was a mistake.  The reviews from the show floor have all stated that the Kinect 2.0 is game changing, and since it is in every box with the Xbox developers are making cools stuff for it.  On the other hand the reviews said that even Sony isn’t showing stuff for their new camera, and that is a shame.  Sony still could have won the price war by making the price $450 and included the camera, and made everyone happy, but instead they made sure that there will never be good content for it.

I hate the new check in mandate for the X1, but I love the things I get with it. It is also where all the games will be, and packing in the Kinect is painful pricewise, but in the end I think it was a smart move.  They just need a new marketing department. Sony made a good console, and there are good games coming out for it, but it is also just the same old thing, and Nintendo has almost just decided to release a console for pretty much their own games, but they are really good games.  I think that when my tax refund comes around I will be buying an Xbox One, but I hope they rethink the check in policy.