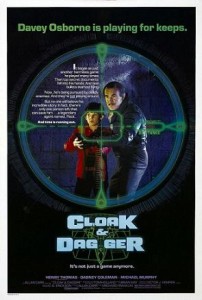 Cloak & Dagger was a 1984 movie that was released as part of a double feature with The Last Starfighter.  It was directed by Richard Franklin, and it was one of my favorite movies as a kid.

The movie is about a Davey Osborne played by Henry Jackson Thomas, Jr. (the E.T. kid) as he tries to deal with the loss of his mother, and he immerses himself in a spy role playing game that has a video game counterpart.  He also uses the main character from those games Jack Flack (Dabney Coleman) as his imaginary friend.  While doing a favor for the local game store owner Morris (William Forsythe) with his best friend Kim (Christina Nigra) he witnesses a murder by some spy thugs, and now he is playing Cloak & Dagger for real.

What I love about this movie is that Kim and Davey run around San Antonio all by themselves and no one seems to care.  They have their bus passes and giant walkie-talkies, so they can get around.  I also noticed that Louie Anderson plays a dirty cab driver in a bad part of San Antonio at midnight, and he refuses to give Davey a ride: shame on you Louie!

Even though this movie was mostly an excuse to sell Atari games like its double feature partner The Last Starfighter, they still made a pretty decent movie, and it holds up surprisingly well.  They all act fairly well and even though hiding secret plans in a video game is the worst plan ever, and Davey could have been thwarted a couple of times if the thugs would just lock their doors every now and then.  It is still a movie that I will watch with my kids someday.

I know nostalgia my be clouding my judgment, but it seems like in the 80’s that all kids movies didn’t have to be garbage like they are now, and I wish more people would take the time make some good ones.