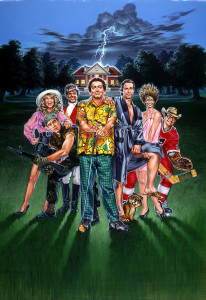 I was on a nostalgia kick and I saw Caddyshack II on HBO Go, and I thought to myself, “Hey Caddyshack is funny and I have never seen two, so why not?”  I should have punched myself in the brain.  This movie is bad.

Caddyshack II is obviously the follow up to the classic Caddyshack.  It came out eight years after the first movie, and it features almost none of the original cast except for Chevy Chase.  It was nominated for four Golden Raspberries and it won two: Worst Supporting Actor for Dan Aykroyd, and Worst Original Song for Jack Fresh.  I can’t believe that I made it through the entire movie.

The story still takes place at Bushwood Country Club, and the gopher is in it, but he has now been upgraded to a major character.  Since Rodney Dangerfield refused to be in it after he read the script he was replaced by Jackie Mason, and it was not an upgrade.  He is trying to join the country club for his daughter who likes to play golf, but the snobby members of the club will not let him in because he is building low income housing near the nice part of town.  This causes apparent zany antics to ensue (or maybe not so apparent).

This is one of those movies that is amazing it ever got a major release.  If the script is so bad Dangerfield will not be in it, you know you are making train wreck, and sadly not even the entertaining kind.  On Chase’s last day of shooting he supposedly told the director Allan Arkush to call him when they were going to add the laugh track.

Speaking of Chase, he is in this movie for like five minutes total, and they are by far the best five minutes of the movie.  That man is a gifted comedian, but still there are another ninety-five minutes of movie to sit through.

You would think that Dan Aykroyd would be decent replacement for Bill Murray, not as good perhaps, but he as made some very funny moves, but they gave him nothing to do in this movie.  He just talks weird and bumbles in the least funny manner, and yet we were supposed to believe that he used to be Special Forces, and that as a Special Forces member his plan to kill someone would involve driving a golf ball through their head, and yes I do mean drive as in hit a ball with a driver and aim for their head.

For all those fill makers out their that are planning sequels, and that is a lot of you.  You should not make it if your biggest returning star is barley in the movie, so the real returning star is a gopher puppet.  It will not work.  As for the rest of you, do not see this movie.  I know this warning may have come twenty-five years too late, but if I save just one I will have done my job.