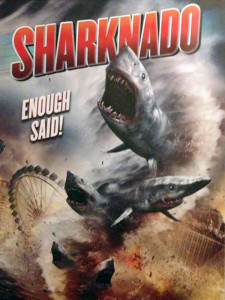 Very rarely does a name make a movie popular, but when the name is Sharknado people notice.  The movie has been blowing up all over social media due to it ridicules name, and even worse production values, but still is it is a movie that is hard not to enjoy.  It was directed by Anthony C. Ferrante and distributed by The Asylum for the SyFy TV network, but thanks to its popularity it was released during mid-night shows around the country, and that is how I got to watch it.

The plot, if you want to call it that, is about Finley ‘Fin’ Shepherd (Ian Ziering (That guy from 90210)) trying to save his family and friends from a Sharkicane(?) that is about to hit LA, but along the way he stops randomly to save people, but things get worse when the Sharkicane starts off a bunch of … wait for it … Sharknados.  Which they fight, yes they fight the Sharknados, with hardware store bombs.

Some (most) of the scenes in this movie defy explanation, and my brain would come out of his hibernation and go, “Hay wait a minute!”, and I would be like, “Not now brain!”, and he would be like, “But, but, but …”, and then the logic abuse from the movie would make him pass out again.

The actors all seemed to know what kind of movie this was, and just have a good time doing whatever this movie required of them, which for the most part was to say and do dumb things.  I could see the glint in their eyes when they had to deliver some of the lines in this movie, and they were so close to busting up.

Thanks to a featurette after the movie, I know that the director thinks he was making a pretty much an ‘A’ quality movie because he used a crane, but I can tell you that he was excessively wrong.  The special effects were bad, the shots were framed and blocked poorly.  It was decidedly ‘B’ all around.  This movie was made for late night drive in movie theaters, and it is a shame that there aren’t enough around for movies like this to be seen in their natural habitat.

The director was convinced that he was making a good movie, and despite the facts that the acting was wooden, the special effects were abysmal, the plot was preposterous, and the general filming was dire.  I cannot disagree with him because move had one thing in its favor: it was completely entertaining, and I left the movie grinning from ear to ear.  That could also be because I watched it with a good group of friends that helped me make fun of it the whole time, but still it was fun, and that is all that counts.