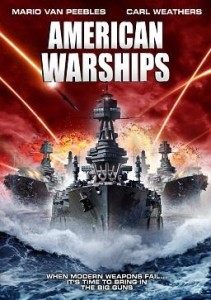 There is something fun about watching a truly bad movie, and American Warships is a bad movie.  It was written and directed by Thunder Levin, who also wrote the classic Sharknado, and it came out in 2012 direct to video to try and convince people that it was the Universal/Hasbro movie Battleship.

A mysterious ship is using a form of EMP pulse, and it is knocking out the Navy’s high tech warships, so it is up the USS Iowa to deal with this threat.  Can this floating museum save the world?  Honestly in a movie this bad it might be worth it to let the world go.

It “stars” Mario Van Peebles and Carl Weathers, but you can tell that they are just picking up their paychecks.  I just kept waiting for Carl Weathers to go in to Arrested Development mode and start saving the food around the set to get a stew going.  Van Peebles just did his best to look stoic, and not to look visibly disinterested in what he was doing, but he fails most of the time.

I know this movie had a micro budget, but I can’t believe that people could bring themselves to make a movie like this, and not just be laughing the whole time.  They all play it so seriously, but the movie is complete and utter garbage.  Now that is not to say I did not have a good time because I did, but that is mostly due to the friends I was with that helped me trash it at every turn.

This movie is bad, and if I had watched it by myself it probably would have been unbareable, but thanks to good friends it was the perfect movie to do a little home MST3King with.  If you are in the mood for something bad then this movie might be just the ticket.  Otherwise stay far away.