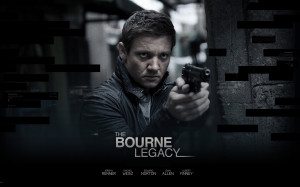 The Bourne Legacy is a 2012 movie directed by Tony Gilroy.  It is the first Bourne movie not to star Matt Damon in the lead role, or any role for that matter, instead it follows Jeremy Renner as Aaron Cross.  The movie is okay, which is a shame because I feel like it could have been so much better.

The movie starts out with Aaron Cross up in the Alaskan wilds tracking down red canisters or something it is never really explained.  While in the wilds we learn that the old the projects surrounding Jason Bourne are being shut down, and if you are a super-agent that means that they are going to kill you.  Cross doesn’t want to be killed, so he fights back and enlists the help of one of the doctors who created the super spies Dr. Marta Shearing (Rachel Weisz) to help him, and then they run from the CIA.

The movie is a pretty basic chase movie.  The CIA wants Cross and Shearing dead, so they run.  There is no other real motivation than that, but the problem is that chase movies are supposed to be tense tightly edited action movies, and The Bourne Legacy is not.  It takes its time to explain the behind the scenes of the CIA Bourne programs, and to talk about Jason Bourne like you always just missed him.  He almost haunts this movie like he is just around the corner.  It takes the wind out of the sails of this movie, and it wastes the talents of all the great actors they got in the various roles.

The actors are all good, and they do what they can with script, but it just seems like they wasted an opportunity to tell a good spy movie in the Bourne Universe with a spy that actually knows what he can do and how to do it, but instead they just gave us another chase movie because apparently that is what Bourne movie are.

The director frames the action well, and when the movie is focusing on the leads it is good, but he needed a better editor.  It was only two hours and ten minutes long but it felt like at least two and a half.  It needed someone to pick up the tempo to add tension, but instead they waste time to tell you back story about something you barely remember anyway.

I am being a little hard on this movie, and for what it is it is passible entertainment.  I just get upset with the fact if they had a little more ambition it could have been really good.  The movie did well enough that they have started a sequel, so maybe now that Cross’s story has been setup they can make something fun.