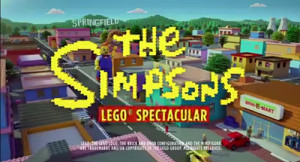 The Simpsons has seemingly been on cruise-control for about the last ten seasons, but they still insure that I watch when it is a Tree House of Horror episode, or a special event.  Last Sunday’s Lego episode was one such event.

The episode starts with Homer waking up, and having everything around him be made of Lego, but he seems to think it is normal.  Slowly but surely he starts to see the real world creep in to his perfect Lego universe, and it is up to him to figure out what is real and what is fake.

Amusingly the plot ends up being very similar to that of the Lego Movie, which is something they make fun of, but it doesn’t have that movie’s pure over unadulterated fun.  There were some good jokes, and a lot of Philip K. Dick references, but The Simpsons still couldn’t find that spark to make this episode truly special.

The best parts of this episode were when they were embracing the Lego universe.  Maggie was giant because she was made of Duplo blocks, and Bart, thanks to his creativity, was a Master Builder.  He made a giant robot that shot out lions!  It was also sweet to see that this episode came about because Homer was having a hard time with Lisa growing up.

Still those good moments were separated by kind of a boring story, and it was a shame that they couldn’t bring it all together for something truly special.  I will still watch The Simpsons for their special episodes, but it is starting to feel like a duty more than a joy.