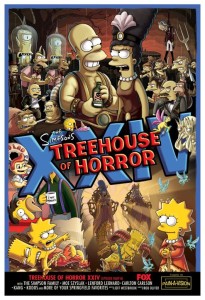 There is only one episode of the Simpsons that I can’t miss every year, and that is the Treehouse of Horror episode.  They aired the 24th episode this year, so they now have a full season’s worth of these special editions.  This year was more interesting because Guillermo Del Toro directed the opening sequence and the couch gag.

The opening sequence was by far the best part.  It managed to work every horror movie villain I could think of in to its two and a half minute runtime.  It is a shame that they didn’t have Del Toro directed the rest of the episode.

The first story was about Bart and Lisa having to share a body because Bart got his head cut off.  It was pretty funny, but it didn’t have enough jokes in it to sustain it for its full running time.

The second story where they made fun of the horror classic Freaks was much better.  It had Homer in the role of the strong man trying to destroy and kill Moe using Marge as the bait.  It was great how they turned all the Springfield crew in to the different sideshow attractions.

It was worth it just to see the opening, so to have fifty percent of the rest of the episode pay off was fine.  I can’t wait to see what they come up with next year.

2 Replies to “Treehouse of Horror XXIV!”