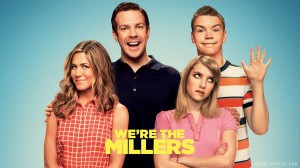 We Are The Millers was a surprise hit in 2013, proving the bankability of a funny concept and a likable cast.  The film was released by Warner Bros and New Line Cinema, and directed by Rawson Marshall Thurber (DodgeBall).  While the film wasn’t wonderful, it was a funny way to spend an hour and fifty minutes.

The story follows David Clark (Jason Sudeikis), a down on his luck pot dealer, as he convinces a band of misfits to pretend to be his family while he smuggles weed in to the country from Mexico.  His “family” includes Kenny (Will Poulter) a lonely kid in his apartment building, Casey (Emma Roberts) a homeless girl from across the street, and last but not least Rose O’Reilly (Jennifer Aniston) a broke stripper.

This movie progresses predictably.  They all start off hating each other, but soon they start to enjoy the idea of being a family.  It is lazy writing, and it causes the film to drag in parts.  Still even with its obvious plot, the cast has talent and chemistry, so it is easy to watch.

Jason Sudeikis and Will Poulter (Also in the excellent ‘Son of Rambow’) really stand out for me in this movie.  Poulter plays the sweet kid who just wants to be with people so well that you just want to hug him, and Sudeikis looks like he is always just about to loose it, but with a smile on his face.  Seemingly channeling Chevy Chase from the National Lampoon films.  Aniston and Roberts are also quite good, but the boys steal the show.

We are the Millers is not going to be added to my favorite films list any time soon, but it is a kind of funny movie with a great cast.  I enjoyed myself, and there are much worse flicks out there.  If they make a sequel, I hope they tighten up the script.