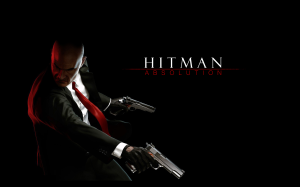 Hitman: Absolution came out in November of last year, and it is the fifth Hitman game.  It was created by IO Interactive and published by Square Enix.  It was not the hit that Square Enix hoped it would be and there are some good reasons for that, but there is still a good game to be played in Hitman: Absolution.

In the game you once again play as Agent 47, but instead of taking contracts like in previous games, 47 is protecting a young girl that may be a product of the same genetic engineering that produced 47 himself.

The plot was a questionable choice for IO considering it places Agent 47, who is all about hunting, in a role where he has to run and protect.  I understand the desire to change things up in video games, especially after five games, but to have whole levels where the point is just to run away is kind of disappointing.

The plot wasn’t the only change.  They also decided to take out the planning before missions, so instead of buying weapons and pouring over maps to figure out what to do, now you just have to just wing it.  I understand shopping and cartography are not usually thought of as fun, but in these games it was always part of the intense problem solving required to get the coveted “Silent Assassin” rank.

They also decided to try and put a focus on special moves, so as you complete tasks you unlock cool skills which sounds fun, but most of them are shooting orientated, and much like the last games the shooting is still poor and draws attention, so you never use them.

That is it for the bad however because at its core it is still a Hitman game, so all the sneaking and problem solving from the previous games is still in there for the most part, but the memorable levels are just more spread out.  I also like that they got rid of the mini-map that let you see everyone in the level, and instead you get a kind of Hitman vision that lets you see though the map for a limited area which is more handy and more challenging at the same time.

Another change is that as you do stealthy Hitman-y things in this game you earn “Focus”, and you can use that Focus to add to disguises, so people with the same outfit as you do not get suspicious, or it lets you use your new special moves.  But for the above stated reasons it is mostly just for disguises.

Hitman: Absolution is not as good as the previous game Hitman: Blood Money, but if you are looking for a Hitman fix, Absolution is a decent game, and you can find it on sale these days for as low as five bucks, so it is pretty cheap.  I hope that they learn from this outing and bring us a great Hitman game next time.