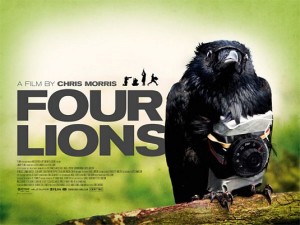 Four Lions is a British film that came out in 2010.  It was created by first time film maker Chris Morris.  The film stirred up a lot of controversy when it came out, and it is not hard to see why.

The film is about a group of radicalized Muslims that are trying to plan a suicide bombing.  The problem is that they are complete and utter idiots, so things do not always work out for them as planned.  Yes that is the plot.

This film is hard to watch.  It takes something that is a current threat and lampoons it in a very British deadpan sort of way, and because of the subject matter I felt bad every time I laughed, and to its credit it is very funny.

I think that is why it is such a brave film as well.  The laughter disarms us enough that we can see the argument the film is making without instantly turning away.  The film is trying to show us the real people behind these attacks, so that we can see that they are somewhat normal people with deeply flawed and twisted thinking.

The film is so uncomfortable to watch that I don’t think I would recommend it to anyone, but it is a good piece of filmmaking.  Not one that I necessarily agree with, but it is filmed in a way that makes the argument palpable enough to listen too.

If you want another take on the movie Daniel compares it with some of Chaplin’s work here.