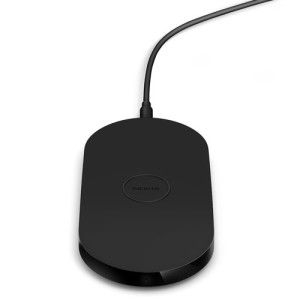 So as my readers know, I recently got a new phone a Nokia Lumia 928, and one of its features is Qi wireless charging, one of the inductive power standards.  I didn’t review that feature at the time because wireless chargers are kind of expensive, and I can be kind of cheap, but as luck would have it a refurbished one went on sale, so I decided to give it a try.

So far all of you that don’t know wireless charging doesn’t mean that the charger just shoots electricity in to the air and charges things, but that all you have to do is set your wireless charging device on the charger and it charges it, so it is not that much different than a normal charger except you don’t have to plug your device in.  You just set it down.  At first I didn’t think such a minor change was all that big of a deal, but it turns out that it is much more convenient.

For instance, if your charger is on your night stand and it is dark in your room you don’t have to try and plug in your phone blind, or if someone texts you at night you do not have to fight with the cord to check the message, you just pick up the phone and look.  It is pretty great.  Plus you don’t have to worry about ruining the USB or device port on your phone by putting in the charger upside-down or sideways.

The charger itself is pretty standard.  It is a small black slab, though it comes in several other colors, and when it is charging something a little LED turns on.  It doesn’t just work with Nokia phones it will charge any Qi enabled devices, so some phones from Samsung and LG will work with it, or you can buy cases and battery kits for all sorts of phones and devices to make it work.

Considering if you pay full price for a Qi charger they can be kind of expensive, I would not recommend running out and getting one, but if they are on sale, or you find a good refurbished unit, or you get lucky both like me and both cases are true than they are fun to have, and they do add quite a bit of convince.  So like Ren and Stimpy used to say about Log, “It’s better than bad it’s good!”