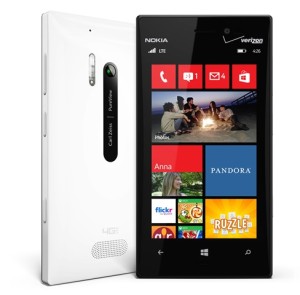 I recently was upgraded to a new Lumia 928 on Verizon.  It runs Windows Phone 8 versus my previous phone that I hacked to run Windows Phone 7.8, and several Nokia specific apps.  Does it live up to my high expectations?  Yes it does.

The first thing you notice about the phone is it is pretty heavy compared to the new iPhones and Android devices, but not so heavy that you are going to drop it all the time.  The front screen is curved to raise the screen up from the phone, but still make it smooth on the edges.  It is subtle difference, but it does feel good.  On the back of the phone is a large speaker the camera and xenon flash.

Windows Phone 8 is a pretty major step forward.  The multitasking works better, you can add notifications to the lock screen, and download custom camera mods.  They got rid of any Zune references, and now everything is Xbox related: Xbox Music, Xbox Video, and Xbox Games.  They have also done a lot of work tweaking the software.  Everything just feels faster.

Nokia has been hard at work making custom apps for the Windows Phone 8 platform.  There is City Lens that lets you scan a city with the camera and it will tell you about any shops or restaurants that you may like.  Nokia Music which is Nokia’s version of Pandora, but there are no listening limits.  Nokia Maps/Nokia Drive+ is probably the most important because it gives you free turn by turn navigation, but it also lets you download the maps, so you can still use them even if you loose cell coverage.

Like with most high end Nokia devices this phone is all about the camera.  It has a modest 8.7 mega pixels, but the kicker is it has hardware based image stabilization so you can take better low light pictures, and not have them turn out all blurry.  The xenon flash helps you with action shots, but since it is so bright it can give people a weird look if they are close up, so it is best to leave it off.  It also has a front facing camera for Skype and self portraits, and it does an OK job, but the rear camera should do all the heavy lifting.

As far as the phone goes there is nothing to complain about.  The sound quality is good, and I haven’t heard any complaints from the people I have talked to.

If you haven’t guessed by now, I love this phone.  It looks great and works well.  It may not be as powerful as the latest Android devices, but I don’t play a lot of games on my phone so I wouldn’t notice anyway.  If you are looking for something different than an Android or an iPhone, this makes an excellent choice.