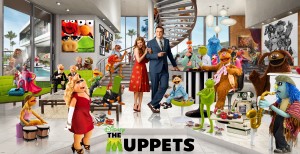 The Muppets came out in 2011 and it was their first big screen movie since 1999’s Muppets from Space.  It was written by Jason Segal and Nicholas Stoller, and directed by James Bobin.  It was the first Muppet movie to win an Academy Award for Best Song for “Man or Muppet” written by Bret McKenzie.  It is an all around fantastic film.

The movie starts off with a boy named Walter, who looks like a Muppet, talking about growing up and how The Muppet Show made him feel like he fit in, so when he, his brother Gary (Jason Segal), and Gary’s long time girlfriend Mary (Amy Adams) go LA, they go to visit Muppet studios, but to their dismay it is run down and being sold to an oil baron (Chris Cooper), and of course the only way to save the studio is get the gang back together and put on a show.

The plot is simple and predictable, but The Muppets bring such charm and pizzazz to everything they do you don’t really care.  Some people also like to point out that this movie can be more about Walter and Gary, both Jason Segal creations, than The Muppets proper, but since Jason Segal petitioned to Disney to save The Muppets from obscurity, I am good with a little self indulgence on his part.

I also like how this movie seems to understand that The Muppets are from a different time, so a lot of the jokes are based around the fact The Muppets may not be relevant anymore, but luckily this movie proved them wrong and was a success so we are getting another Muppet movie next year.

The song and dance numbers are great, so at least Segal and McKenzie know how to stage a good musical, and just like any good Muppet movie it is jam packed with surprise star cameos..

I love The Muppets and I loved this movie.  It may not be the most gripping or belly laugh funny movie ever, but I almost never stopped smiling while I was watching it, and in my book that is high praise.

2 Replies to “The Muppets Return!”