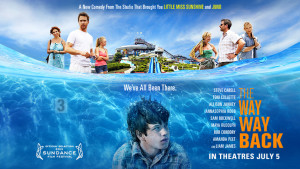 The Way Way Back is an independent movie released by Fox Searchlight Pictures in 2013.  It was written and directed by the Academy Award winning duo Nat Faxon and Jim Rash (Community) (they won for The Descendants by the way).  This movie continues their winning ways.  They know how to write touching and funny characters.

The story is about Duncan (Liam James) a teenage boy on vacation with his mother (Toni Collette) and her jerky boyfriend (Steve Carell) Trent.  He is having a hard time dealing with the divorce and his mother dating, and to make matters worse Trent is critical of Duncan’s every move.  As luck would have it Duncan meets Owen (Sam Rockwell) a local waterslide owner who takes Duncan under his wing.

The writing is very good in this film.  Faxon and Rash are proving to be a power writing couple.  The dialog is sharp and witty, and it gives the actors the ability to act to their full potential.  Even though if you think back and look at the story it seems a bit contrived, when you are watching it all play out it is engrossing.

The actors are all great.  I love Sam Rockwell, and he once again shows why he is one of my favorite actors.  He is able to play the loveable looser Owen so well in this movie that I want to hang out with him and work at the waterslides for the summer.  Steve Carell’s Trent is a complete jerk in this movie, and you will hate him by the end of this film.  He never slides back in to lovable dork Michael Scott from The Office.  Liam James as Duncan is a believable teen in crisis.  You just want to give him a hug the whole film.

This was a great film to watch.  It makes you both love and hate the characters in it.  If there was ever a doubt about Faxon and Rash’s talent, they have squashed it.  I can’t wait to see what they do next.  Until then you should check out The Way Way Back!

3 Replies to “Shmee Finds The Way Way Back!”