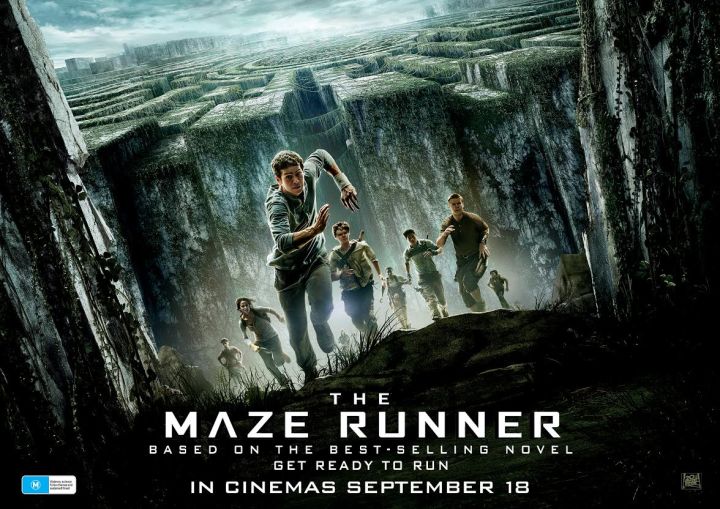 The Scorch Trials opened in theaters this last weekend, but since I have a toddler and am cheep, I watched its predecessor The Maze Runner on HBO Go.  I went in with pretty low expectations, with some notable exceptions, the YA (young adult) novel genre has not generated a lot of good movies, but I have to say The Maze Runner was a solid effort.

The movie follows a young man (Dylan O’Brien) who wakes up in an elevator with no memory, and at the top of the elevator he finds himself in idyllic glade.  The problem is that the only way out of the glade is through a giant ever changing maze that is full of monsters.  He and the rest of the boys in the glade will have to figure out the maze’s secrets in order to get home.  Wherever or whatever that is.

Much like all, or almost all, YA novel adaptations this movie takes place in a not so distant dystopian future.  Though unlike most YA movies at least you have no idea what is going on.  Even after watching the movie, I am pretty sure they have not explained everything to me.  The little extra mystery helps separate this movie from the rest of the ever increasing pack.  So much so that Mrs. Shmee almost wanted to drop off Lil’ Shmee with a babysitter so we could continue the filmic adventure.

The cast all did a good job.  I am not sure that anyone is going to make this film the first item on their resume, but no one turned in a bad performance either.  Workmanlike jobs all around.  It was refreshing to see so much competence out of a young cast.  Plus it featured Will Poulter from Son of Rambow, and I am all for any of those kids getting more work.

The special effects could have used a little more cash, but since they were used sparingly they didn’t detract from the film, and the direction by Wes Ball was fine.  Nothing stunning, but much like the acting and the story it was done well.  If you are getting the feeling that this was just a well made movie all around, you would be correct.

I don’t believe that The Maze Runner is going to be anyone’s favorite movie, unless they have a crush on one of the leads, but it was still a quality movie made by people who knew what they were doing.  If only most movies were as well made.  I stated in the intro to this review that it was a “solid effort”, and I do believe that is the best way to describe The Maze Runner.  Solid, and there are worse things being an entertaining and competent movie.