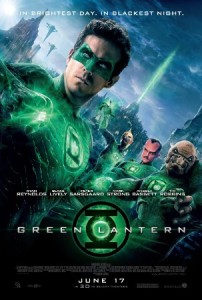 The Green Lantern is my favorite comic book character.  I love that he is a space cop, that his powers are limited only by his imagination, and that it is all just a little odd.  So when they made the 2011 movie I was more than excited.  Then the movie came out, and it was terrible.  You would think that would be it.  I would watch the terrible movie once, mourn, and then move one, but no, I can’t.  My love of the Green Lantern will not let me.  So I watch his movie about once a year, and I wince my way through it.

It is bad on just about every level.  The story is rushed, the special effects are less than special, and the acting is poor.  My wife pointed out that Ryan Reynolds is not the problem with this movie, and that it would be bad without him, and she is right, but he doesn’t make it any better.  It feels like no one really had any passion for this movie, so they kind of threw it together, and as a fan of the character, I think that hurts most of all.

I previously wrote about some ideas for the new Green Lantern movie, whenever that comes out, and it will because of DC’s need to get the Justice League off the ground.  What they really need is someone who loves the Green Lantern Universe as much as the fans do, and will tell good Green Lantern Corps stories.  I could have lived with sub-par special effects and Ryan Reynolds if they would have told a story worth telling, but they couldn’t figure out what they wanted to do. Did they want a space epic?  A simple origin story?  The story of how Sinestro goes bad?  Any of those could have been one movie, but instead they slam them all together, and give us a muddled mess.

Comic book movies are the biggest box office draw right now, and Hollywood loves a sure thing, so I will get another movie with a Green Lantern in it.  I just hope it comes out soon, so I can stop watching this horrible movie.  For now it is the only big screen adaptation I have, so I will keep watching it with a tear in my eye.