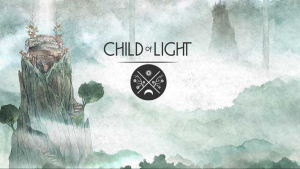 Child of Light was recently released by Ubisoft Montreal and published by their parent company Ubisoft.  It trades out the usual grim and gore of normal RPGs for a light and airy watercolor-esque world.  The game was too pretty for me to pass up, and I have enjoyed myself immensely.

The game starts off with a woman telling her child a story about a girl Aurora who become very ill and fell asleep, but when she awoke, she was in far away land.  She must free the land from the darkness that has gripped it, so she can return home, and be with her beloved father.  It will not be easy, but she will pick up friends along the way including a firefly by the name of Igniculus.

The story tries to rhyme the whole way through, but it is not successful.  I appreciate the effort, but I think they should have given up and just made the text more interesting.  While the story is sweet it is not overly gripping, but since they were going for a fairy tale story maybe that was on purpose.  Still it does its job and moves the game forward.

The game is a turn based RPG, with the slight twist of an added timing element, so if you finish an attack on a monster while it is gearing up for its attack, you cause it to loose its turn.  Likewise the monsters can do the same to your party.  Your firefly companion also gets in on the action.  If you have him hover over a monster, he slows it down, but if you have him hover over a member of your party, he heals that person.

There is a limited loot system.  There are the standard potions, health, magic, revive, and what-have-you.  Then there are oculi.  These are gems that you can add to your attacks or defense to change up your powers a bit.  Equip a ruby on your attack, and now you do fire damage.  Put it on your defense, and now you are guarded from fire.  You do your best to try and match your oculi to the type of creatures you are fighting for maximum advantage.  You can combine oculi to create stronger or varied bonuses.

Now for the moment of truth.  Is the game fun?  I think so, and I also found it quite relaxing which is a change from the norm.  It was nice to lean back and explore the world of Lemuria, and do battle with polite monsters that take their turn.  It is a shame the story didn’t pack more of a punch, and it is a little short at about ten hours, but for fifteen bucks that is quite alright.  It was a great change of pace for me, and I think it will be for you too.

One Reply to “Let The Child Of Light Tell You A Story!”