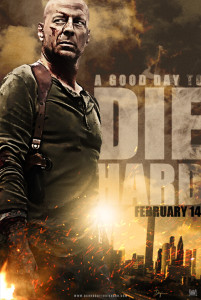 Finally after five movies the Die Hard franchise appears to have lost its steam.  Bruce Willis still looks the part of John McClane, but they have run out of interesting stories for him to dispatch bad guys in.

The movie is setup when John McClane finds out that his son, Jack, is in prison in Russia, and he decides to go check it out.  He then gets in the way of his son rescuing a Russian national with dirt on a top Russian official, and then they shoot pretty much everything in Russia.

The main problem with this movie is that they seemed to forget what makes the Die Hard movies great.  It is not the hard core action, which this movie did have, but the witty dialog.  Bruce Willis is a good comedic actor, so his delivery on one-liners is probably the best in movies, but for some reason in this movie they decided to replace that with him and his son talking about how crappy of a father he was.  Absentee fathers make some interesting movie stories, but they kind of drag down what is supposed to be fun shoot-em-up.

Another problem is that they decided to make John McClane pretty much invincible in this movie.  I started to think that maybe we were watching another Terminator movie where the robots sent back a John McClane look alike to repair his relationship with his son.  In the first Die Hard movie he was barely standing at the end of that movie.  In this one he seemed to be doing alright, and the stuff he lived through was much worse, so I guess he is getting tougher with age or something.

Not to give anything away, but now that John and Jack have made up if they make another Die Hard I hope they get back to having it be fun again, and not a story about two moping dudes murdering Russians.  There are worse action movies, and the action itself is still good, but everything in between the fighting was a let down.