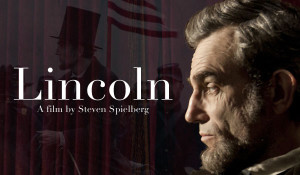 Lincoln is a movie about the 16th President by Steven Spielberg.  This a rare movie from the award wining director: it is a small personal picture instead of a grand sweeping epic.  I think the change of pace was good for this prolific director.

Lincoln is about the last few months of the President’s life as he was trying to push through the 13th Amendment to abolish slavery, and win the war with the south, but this movie is about backroom politics, not the Blue vs. the Gray, so while there are a couple of war scenes, this movie is mainly a bunch of meetings.

Don’t let the thought of a bunch of old dudes arguing keep you from watching this movie.  This movie is riveting in much the same way that 12 Angry Men is: as you watch the President use all his power and influence and his cunning to get his amendment to pass.  It is amazing to watch the political process work, and the kind of shenanigans they were willing to pull off to make this bill pass. Sadly we all know this movie ends in tragedy.

It was great to see Spielberg take a break from making big movie, and do a stripped down human interest political drama.  This movie has three main sets it would be very easy to convert to a play.  It proves that he can direct anything, and should not just be thought of for his big budget epic blockbusters.

The casting of this movie was spot on.  Daniel Day-Lewis gives another award worthy performance, as do Tommy Lee Jones and Sally Field.  They really bring this movie and time period to life.

Lincoln is a great movie, and one that everyone involved in will be remembered for.  Spielberg adds another gem to his collection of films, and this is definitely a movie everyone should watch.