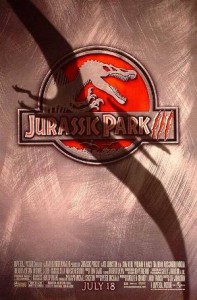 Jurassic Park III is the aptly named third Jurassic Park movie, but the first not directed by Stephen Spielberg, but instead by Joe Johnston (The Rocketeer).  This movie is in the same vein as The Lost World, where it doesn’t live up to the fist movie, but it is still fun to watch.

The plot is short.  Pretty much a boy (Trevor Morgan) gets lost on Isla Sorna while parasailing with his mom’s boyfriend, and his mom (Téa Leoni) and dad (William H. Macy) kidnap Dr. Grant (Sam Neill) to help them find him, but then they get attacked by dinosaurs and have to try and survive.

I actually like the simplicity of the plot.  They didn’t try and over think things, and because of that it is believable, and really there aren’t any major holes.  The only thing that is questionable is how the boy lived alone on the island for eight weeks, regardless of the fact that there are man eating animals on it.

The acting is believable, and Sam Neil as Dr. Alan Grant is great.  You believe that he is a world renown paleontologist, and he makes more sense in this movie than Ian Malcolm (Jeff Goldblum) in the last movie.  Everyone else just needs to scream and get eaten well, and they do.

The special effects are worse and better then the last movie, but still not up to Jurassic Park’s standards.  The computer generated effects were better, but the animatronics looked worse, so it was kind of a mixed bag, but they were still good enough to not be distracting.

I liked this movie better than The Lost World.  It was more focused, and streamlined, and Alan Grant is better than Ian Malcolm.  It is not a great movie, but it is an enjoyable one.