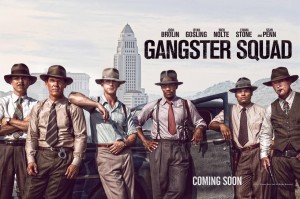 Gangster Squad is an early 2013 movie and fictional account of the ‘Gangster Squad’ that went after Mickey Cohen in the late 40s and early 50s.  It was directed by Ruben Fleischer.  It is probably most famous for being delayed and reedited after the Aurora Colorado shooting.  It is a good action movie, but people expecting more than that will be disappointed.

The movie starts with John O’Mara (Josh Brolin) busting up a forced prostitution ring, but since it is Cohen’s (Sean Penn) turf he gets a slap on the wrist instead of a slap on the back.  Chief Bill Parker (Nick Nolte) finds out about it and decides that he is just the man he needs to build a squad of men to start a war with Mickey.  The men he picks out are: Jerry Wooters (Ryan Gosling) as the playboy, Coleman Harris (Anthony Mackie) as the knife expert, Conwell Keeler (Giovanni Ribisi) as the smart one, Max Kennard (Robert Patrick) as the old gunslinger, and Navidad Ramirez (Michael Peña) as the kid that tags along with Kennard.  So they leave their badges at home and go to war with the mob.

There is nothing more to this movie than that it is simply and war/gangster movie staring a bunch of good looking guys shooting at each other in a beautifully stylized 1950s LA.  The characters never really grow past their introduction.  The movie is simply that Mickey Cohen is bad, so we are going to bust up his operation and kill a bunch of gangsters in the process, but it does that really well.

Considering all the Oscar level talent in this movie some may have been expecting more out of this movie, like an examination of a post war violent LA, or to go deeper in to whether all the violence was worth it, but that does not happen.  Fleischer just shows us a bunch of really well choreographed gunfights, and they are stunning.

The actors all seem to be having fun in their sharp tailored suits, and shooting each other with tommy guns while playing out their war movie caricatures, and they play their parts well.  Sean Penn especially got in to Mickey Cohen as the excessively evil sociopath, and Emma Stone does her best glamorous damsel in distress as Grace Faraday.

Gangster Squad was a fun movie, but I know a lot of people didn’t like it because instead of a smart deconstruction of the gang violence of the 50s it was just a glorification and exploitation of it, but if you go in wanting a stylish action movie you will be happy because that is exactly what you get.