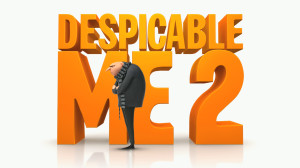 Despicable Me 2 is obviously to the sequel to the 2010 movie Despicable me.  What is different this time around is that it went from a pretty large hit last time to a mega hit this time already taking in over $750 million dollars worldwide, and still going strong, but much like last time this movie is saved by the adorable yellow minions.

The film starts with a giant magnet flying over a top secret base and stealing it, so the AVL (Anti Villain League) recruits Gru (Steve Carell) to help them find out who did it since he was once a villain himself, but Gru is much more interested in keeping his oldest daughter away from boys, and the minions just do a bunch of wacky stuff.

The problem with this movie is that they totally waste what made Gru somewhat interesting and that was being super villain and coming up with crazy schemes.  Don’t get me wrong he is a sweet dad, but it is just not as interesting as him trying to steal the Moon.  They could have at least let him create a crazy plan to counter the evil villain’s crazy plan, but at least minions are as funny as ever.

The special effects are as good as you would expect for a current day 3D animated film, but at this point if they weren’t it would be very disappointing.

The actors all know their roles, but there were not really any standout performances.  Just Steve Carell with a crazy accent and bunch of people getting paid, and with the success of this film they will probably get paid a whole lot more for next time.

If you liked the yellow minions than you will like this movie.  If you like the rest of the characters than you probably will be disappointed because they do not do a whole lot.  It is no wonder the minions are getting their own spinoff, and I am sure it will make oodles of money.

One Reply to “They Made a Sequel to Despicable Me?”