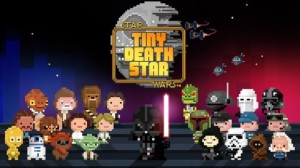 Star Wars: Tiny Death Star is created by NimbleBit the same people that made the very successful Tiny Tower.  It is published by Disney Mobile and Lucas Arts.  It is out for pretty much every major platform, but I would advise against it.

The game starts off well with Emperor Palpatine telling Darth Vader his new plan to finance the Death Star by getting people to move in, pay rent, and buy stuff.  It is very funny and it fills in one of the major plot holes of Star Wars: “How the heck could they pay for the Death Star?”

The writing is fantastic and funny.  It pokes fun at Star Wars, but with more than a little love. It also has a great look, and characters from the Star Wars Universe have never been cuter.  All of them are in this game with their own little cut scenes.

After that it quickly goes down hill.  Like many RTS type games, you are in charge of planning out the apartments and stores for the people known as Bitzens, but the rates that these things build or restock is ridiculously slow unless you spend Imperial Bucks which of course can be paid for with real bucks.  Also if you want things to run well you need to hire VIPs which again you can pay for will real money.

If they balanced this game well it would have been worth quite a few dollars, but in its current state it is unplayable unless you pay, and once you start paying there is no telling how much it will cost.  With the Star Wars license, geeks like me would have paid for a good game, but to be nickel and dimed every three seconds is just too much.  If they come out with well balanced flat fee game, I would recommend it, but not as it is.