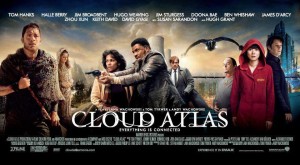 Cloud Atlas is a 2012 movie that was Produced, Written, and Directed by the Wachowski siblings and Tom Tykwer.  It is based off of the 2004 novel of the same name.  It is a very polarizing movie that ended up being on a lot of best and worst movie lists.  I guess I am one of the rare viewers to fall in the middle.

The movie features six stories with the same actors playing different characters in each.

A young planation owner on his voyage back from the pacific islands.

A young man seeking his fame and fortune working with a famous composer in hopes to publish his own symphony.

A man is trapped in a nursing home.

The story of an arrested fabricated fast food worker.

In a future dystopian world the human race is struggling to survive.

All the stories work together in various ways.  I will not give them away here considering that is part of the fun trying to figure out how they all fit together, but part of the problem is that not all of the stories are as interesting as each other, so you find yourself disappointed when it cuts to one of the lesser stories.  But I would say four out of the six are very good.

The point of this movie is to track the changes of the human soul in different times and circumstances, and I am not sure that I got that out of it, but I did see a lot of humans overcoming horrible events.  Which is interesting and at times gripping.

The cast is very good, but when you have Tom Hanks, Halle Berry, Jim Broadbent, Hugo Weaving, Hugh Grant and many more that is to be expected.  Tom Hanks recently said that this movie recharged him so that he could do Captain Phillips and Saving Mr. Banks, and it is one of the movies he is most proud of.

The special effects are for the most part very good with the main exception being some of the makeup.  With people changing race and gender a few times some of the makeup can be a little dodgy, but it does help you figure out who’s who.  The vistas of Neo Seoul and the far future as well as the sets from the past all look great.

This is one of those movies that I was not so sure about when I watched it, but as I think back on it, I like it more and more.  At least the Wachowskis never do anything normal or boring.  If you have time and are looking for something a bit different then Cloud Atlas might be it.

2 Replies to “Figuring Out Cloud Atlas!”