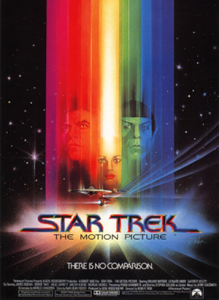 With a new Star Trek movie coming out this year, I have decided to go back and watch some the older Star Trek films, so why not start with the first one.  Star Trek the Motion Picture is a 1979 movie based off the Star Trek TV show.  It was originally the pilot to new TV show code-named Phase II, but that was too expensive, so it got scraped, but then Star Wars came out, and Paramount found the money to fund a new Sci-Fi movie.

The setup is there is an unknown object rushing towards Earth generating tons of power, and wiping out all life on its way, so the crew of the Enterprise, and the now Admiral Kirk have to go and see if they can reason with it and stop it from destroying the planet.  The story sounds kind of epic, but not a lot really happens in this movie.  Pretty much Kirk takes the Enterprise away from Captain Decker, who gets understandably angry, and then they go and stare at this giant ship for awhile while talking to a hot android that looks like the navigator Ilia, who the giant ship killed, and all while wearing cool blue pajamas that for some reason never show up again.

This movie’s main fault is that it could have used a better editor, it would have made a pretty good hour and half long movie, but at over two hours it really drags in some places, and there are more long ship pans then I think have ever graced the silver screen before or ever will.  This movie goes from some dialog, and then starts to pan over a ship for what feels like forever, and this happens a lot.

This movie did bring the crew back to the Enterprise, and you can tell that they were having fun being together again, so it is not a total loss, and when the mystery of the giant ship is revealed it is pretty cool.  They just needed someone to tighten it all up a bit, but I still enjoy this movie, and need to find myself a pair of those blue PJs.

5 Replies to “Does Star Trek the Motion Picture hold up?”